You are here: Home / News / Senator Ernst won’t endorse King or other Republicans in congressional race 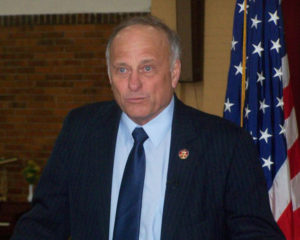 Iowa Senator Joni Ernst was asked during her weekly conference call if she had talked with fellow Republican Congressman Steve King after King responded on twitter when Ernst said she thought President Donald Trump’s remarks about four minority congresswomen were racist.

She was also asked if she would endorse King as he runs for another term. “No I haven’t had any discussions with the congressman about that. And obviously my statements are my own, and everybody’s statements are their own and I will not be endorsing anyone in that primary race,” Ernst says.

King had tweeted to Ernst that it is ‘not constructive’ to advance the narrative of the four congresswomen against the president’s policies. The tweet referenced Ernst’s statement that said Trump’s comments “were not constructive” and “not helpful.”

King represents the 4th District and is running for his 10th term.  He faces a challenge in the Republican primary from  State  Senater Randy Feenstra of Hull,  Woodbury County Supervisor Jeremy Taylor, and retired Irwin businessman Bret Richards.