You are here: Home / Fires/Accidents/Disasters / Trooper uses portable defibrillator for first time and it saves a life 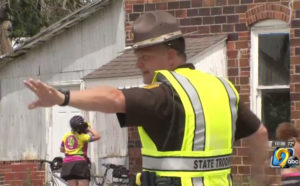 An eastern Iowa state trooper is glad he’s kept a little used piece of equipment ready to go after it was needed to save the life of a rider on RAGBRAI Wednesday.

Trooper Bob Conrad told KCRG TV doing traffic control when riders told him they saw someone who was struggling.
“Myself and another trooper responded to that area. As I was just climbing into the car I heard someone saying ‘they are doing CPR,” Conrad says.

Conrad pulled out his portable defibrillator (AED) that he always carries with him. “Started doing the shock with the AED. Gave him one shock, continued on with CPR and then it advised for another shock,” according to Conrad. The man’s heart started beating again after the second shock and trooper Conrad says he was taken to the hospital.

Conrad told KCRG TV that he ordered a special batter for the device last month. He says he wanted it to be fresh and ready to go.
“I have that in my car for years and not had a need for it,” Conrad says. Conrad said it’s great to be able to save a life rather than tell a family member someone has lost theirs.

The rider has been identified as 62-year-old Greg Abbey from Washington state. He is currently hospitalized in serious condition.