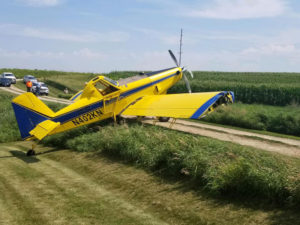 The pilot landed this crop duster and walked away.

A pilot had to make an unexpected landing over the weekend in Marshall County.

John Yost was heading back to the airport in his crop duster when the plane began having some mechanical issues. Yost was able to make an emergency landing near a hay field on Parker Avenue near Haverhill, not too far away from where a children’s birthday party was going on.

The only injury was to one of the plane’s wings. Yost was not injured and the FAA says he did everything he should. The plane did not have any chemicals on at it the time of the landing.