You are here: Home / Fires/Accidents/Disasters / Some levy breaches closed in Mills County, many remain 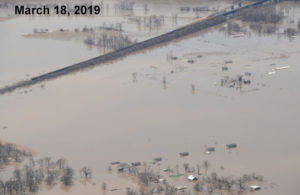 More than four months after floodwaters devastated parts of southwest Iowa, the U.S. Army Corps of Engineers has completed the first four breach closures on levee systems on Iowa’s side of the Missouri River, with at least 40 more breaches to fix.

Fremont County Emergency Manager Mike Crecelius says depending on how much snowfall comes next winter, he’s worried the promised protection won’t be enough to prevent more flooding. “At 25-year protection, anything like what we had this year or in 2011 or last year will overtop that 25-year protection level,” Crecelius says. He adds, he’s been told getting levee systems to pre-flood conditions could take two to three years.

Mills County spokeswoman Sheri Bowen says the continued flooding has had people digging deep into their pockets — and savings accounts — to pay the mortgage on their damaged homes and to also rent temporary places. “At this point, as folks are getting settlements from FEMA on their properties, they’re finding that ongoing rent support is just no longer an option for many households,” Bowen says. “So financially it is a huge, huge strain for people.”

Bowen says some people are living in campers, which won’t work in the fall and winter when cold weather arrives. FEMA has provided Mills County with eight mobile home units so far.