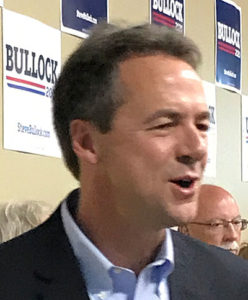 The campaign trail in Iowa is vacant as 20 Democratic presidential candidates prepare for nationally televised debates tonight and tomorrow night.

Montana Governor Steve Bullock will be on stage tonight in Detroit, but he didn’t qualify for the first round of debates and recently offered this critique of his competitors’ debate performances in late June.

“It seemed like some of the debate within the Democratic Party was detached from individual’s every day lives,” Bullock said in Council Bluffs earlier this month.

This past Saturday, San Antonio Mayor Julian Castro predicted health care and immigration will be among the key issues he and the other candidates debate tomorrow night.

“My name ID is still lower than for several of the other candidates, so I want to make sure that I continue introduce myself, talk about the vision that I have for the future of this country,” Castro, who served as President Obama’s Secretary of Housing and Urban Development, told reporters in Des Moines.

South Bend, Indiana Mayor Pete Buttigieg last Friday said his goal in tonight’s debate is to give Americans an idea of what kind of a competitor he’d be in the General Election.

“I still think this conversation is too much about the current president, not enough what it’s like to live in American under this president or under all of the failures of the last 40 years to really deliver for people,” Buttigieg told reporters after a campaign event in Ankeny.

Jeri  Sanburn of Bondurant will be hosting a debate watching party.

“Just some friends, some political groupies. We have a women’s coffee caucus,” Sanburn says, with a laugh. “We write letters and we volunteer on campaigns and we try to stay up on the issues. I have grandkids. I’ve got to care.”

Carl Smith of Ankeny, a retired Iowa State University professor who lives in Ankeny, saw Cory Booker in person last Friday, but hasn’t settled on a candidate yet.

“It’s a difficult type of final decision to be made,” Smith said during an interview in Greenfield. “My wife and I both are going to be watching the debates this week and still trying to figure out who we want to support.”

Smith predicts his decision will be made in December. Mark Molloy (muh-LOY), a California native who now lives in Des Moines, is a Buttigieg backer. He’s hoping for something beyond soundbites in these two debates.

“I’d like to see each of the candidates use their minds in real time,” Molloy said. “I find it very disappointing when all they do is trip the on switch for a particular speech they already have.”

The debates over the next two nights will air on CNN, start at 7 p.m. Iowa time and last for two hours.