You are here: Home / Agriculture / Grassley and Vilsack together in D.C., touting USMCA 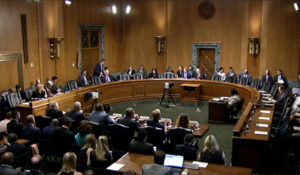 Republican Senator Chuck Grassley and former Iowa Governor Tom Vilsack, a Democrat, joined forces today in the nation’s capitol — making the case for ratification of the USMCA, which would replace the North American Free Trade Agreement.

Vilsack, who served eight years as U.S. Secretary of Agriculture, is now president and CEO of the U.S. Dairy Export Council.

“Nobody could consider NAFTA to be better than USMCA,” Grassley said, “and nobody should dismiss the importance of a half-trillion dollar market for U.S. agriculture products.”

“Whatever helps the U.S. food and agriculture industry helps the country,” Vilsack said.

“It will build momentum for progress, hopefully, in other trade discussions, especially in Japan and possibly China,” Vilsack said.

Vilsack mentioned nearly a thousand U.S. food, ag and trade groups recently signed onto a letter to congressional leaders — to make the argument that the USMCA will cultivate “more fair and robust” trading relationships with Canada and Mexico.