You are here: Home / News / Historic steam locomotive to travel back across Iowa 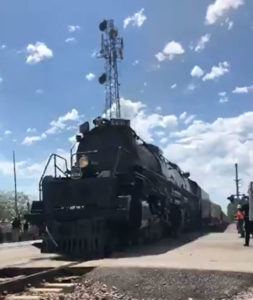 The Big Boy in Boone.

A massive steam engine is making an encore trip across Iowa after heading through earlier this month on its way to Chicago.

Iowa Historical Society spokesman Michael Morain was among those who watched when the “Big Boy” steam locomotive come through Boone on its way east and says there were hundreds of people at the intersection where it was scheduled to stop. It is heading back west now as the Union Pacific continues the celebration of the 150th anniversary — of the transcontinental railroad.

Morain says people sat in lawn chairs and stood along the line  to see the  Number 4014 locomotive that is one of only eight remaining of the original  25 of this kind originally built for Union Pacific in the 1940’s.

“Just seeing the engineering that goes into it — and there’s still some of the romance of the railroad era — you see it in movies. And just seeing how it all operates is something to see,” Morain says.  “Especially this kind of engine where you can feel the steam, you can feel the heat,  you can small just the workings of it, the machinery, that’s different than most of the trains that we see most days.”  Morain says you should try to get out and see the train as it makes its way back across the country.

“There is a mobile museum on a train car. The Union Pacific has carved out one of its train cars so people can climb up  into the car and see a little bit about the history of the Union Pacific,” Morain says. He says Iowa played a big role in the railroad expansion with the knowledge of railroad mastermind Grenville Dodge of Council Bluffs.

He says they have a lot of documents on Dodge’s story at the society.  “And it’s a fascinating story about how one person influenced a huge team that influenced the country,” according to Morain.   Morain says most people don’t understand the huge influence the railroad had. Before there was an internet — or even an intestate — the railroad was the tie to the rest of the county.

“In this day and age it’s hard for us to imagine what a transformative factor the railroads were…by the 1860’s or so, trains and railroads were making their way through Iowa. And that’s how much or Iowa was settled,” Morain explains.  The early influence is still seen in the way Iowa’s cities are laid out.

“There’s a town every 10 miles or so partly because of that’s how Iowa was settled with the benefit of railroads,” Moraine says. “So, the railroad transformed Iowa in lots of that still affect us in ways that we notice, and in ways that we take for granted now.”

The Big Boy is scheduled to stop in Clinton at 12:45 p.m. today at 1400 Beaver Channel Parkway, and will stay until 1:30. It will then stop in Wheatland at the Toronto Street Crossing at 2:45, before spending the night in Cedar Rapids. It will leave Wednesday and got to Belle Plaine, Marshalltown, Elkhart and Des Moines.