You are here: Home / News / Reynolds favors ‘carrot instead of a stick’ approach to welfare reform 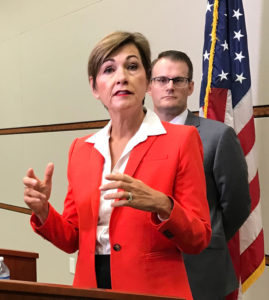 Governor Kim Reynolds today said she’s not ready to reveal details of the “new direction” she is seeking in the largest agency in state government.

Reynolds, who asked the director of the Department of Human Services to resign last month, confirmed welfare reform is part of the discussion. “We’re going to look at everything,” Reynolds told reporters. “I’m not going to specifically start to point things out.”

This past February, Reynolds said the state cannot afford to pay welfare benefits to able-bodied adults who do not have children to stay at home. Some of the governor’s fellow Republicans in the legislature say welfare reform will be a priority issue next year. Today, Reynolds said she wants to encourage welfare recipients to enter the workforce with a “carrot instead of a stick” approach.

Reynolds held a news conference this morning to tout a state website that was redesigned in June and currently lists more than 80,000 job openings in the state.

“Any time or any way we can get information out to Iowans who are looking for an opportunity to have a better career and a better quality of life in Iowa, we should do that on all fronts,” Reynolds said.

Reynolds later reviewed with reporters the reasons she has given for dismissing Department of Human Services director Jerry Foxhoven. Foxhoven has said he was asked to resign after raising concerns about having agency money pay the salary of a staffer in the governor’s office. Reynolds disputes that.

“I want to be clear,” Reynolds told reporters today. “He never raised any concerns to me or my office about anything.”

Reynolds indicated the practice of financing governor’s staff salaries with funds legislators set aside for state agencies dates back to the 1970’s when Robert Ray was governor. Reynolds said a few state agencies are checking to ensure state rather than federal funds are being used to pay some of her staff.

Reynolds has declined — as she did again today — to list the reasons she asked Foxhoven to resign.

“I don’t believe that the agency is where it should be and I think that we can do better and because of that, I’ve made the decision to go in a different direction and that’s what we’re doing,” Reynolds told reporters.

Reynolds sid she’s looking for someone with new ideas to lead the Department of Human Services, someone who’s provided “transformational change” in a previous setting.