You are here: Home / Recreation / Entertainment / DNR warns of paddling dangers on waterways 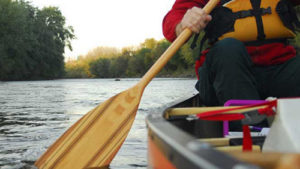 The Iowa Department of Natural Resources is warning paddlers to use caution on the Raccoon River in Des Moines and Upper Iowa River in Winneshiek County as there could be obstructions caused by falling trees and logs.

The DNR’s Todd Robertson says people in kayaks and canoes have flipped when a strong current took them into the obstructions. Robertson teaches paddling courses and says it’s something everyone should look into — especially rookies.

“Whether it’s canoe, kayak or paddle board, you should know four or five basic strokes. If you know those strokes and know how to navigate your vessel — your’re going to be much, much safer out on the water,” according to Robertson. “But when you end up going to a corner store and just buying the first kayak you see and then head straight to the river, that’s when things can happen. Seeking formal instruction, knowing safety, knowing rules and regulations is very important for first-time paddlers.”

Robertson teaches paddling classes through the DNR and says there are other opportunities for lessons. “There’s paddling clubs around with seasoned paddlers that you can find on Facebook. Granted, they may not be certified instructors, but you can learn some basic strokes. A lot of these bigger retails stores that you go into, some of them offer a free hour or two-hour paddling class,” he says.

Robertson has been seeing more people get into paddle boards. “It’s so easy to get into paddle boarding because unlike a canoe or kayak — it doesn’t fill up with water. So, if you dump into the water you are able to get back on your board real quick, plus it’s just real fun,” Robertson says. “I think for the last four or five years it’s been the fastest growing outdoor vessel as far as activity goes.”

Paddle boards can be used on the same waterways that are used for kayaks and canoes. “You can definitely run them on a river — but it’s not advised until you have a lot experience — because it is a whole different ballgame. The strokes are basically the same, but you are up against moving water rather then just flat unmoving water,” Robertson says.

Robertson says the lifejacket rules apply the same to paddle boards as the other vessels. “Just like canoes and kayaks — you’ve got to have a lifejacket on that board,” Robertson says. Robertson, is the DNR River Programs Outreach Coordinator, and says it’s natural for rivers to have the hazards from trees and logs.

A section of the Raccoon River from Walnut Woods State Park to Waterworks Park in Des Moines has caused a lot of problems for paddlers recently. A large log jam that formed upstream of Chimney Rock Park on a river left outside bend of the Upper Iowa River in Winneshiek County near Decorah has also been causing problems. You can see a real time look at issues on the water through the DNR’s interactive paddling map at iowadnr.gov/paddlingmap.