You are here: Home / Fires/Accidents/Disasters / BNSF rail cars go off the track near Hull 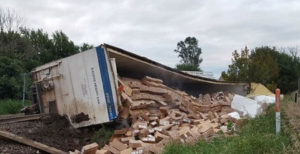 A train derailment is under investigation in northwest Iowa.

On Wednesday at 8:32 p.m., the Sioux County Sheriff’s Office received reports of a train derailment that occurred on the BNSF Railway, five miles northwest of Hull. Upon further investigation, responding personnel discovered that approximately 25 of the 83 car train derailed.

The train cars consisted of refrigerated, tank, freight and rock cars; the specific contents of the derailed cars is unknown at this time and being assessed. No injuries were reported.