You are here: Home / News / Ex-DHS director says he was a whistle blower, will sue over his termination 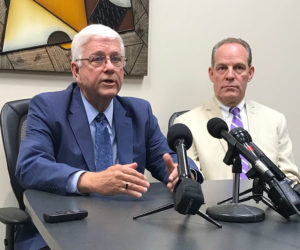 The state agency director who was dismissed six weeks ago says he’s taking legal action to clear his name — and to send a message to his former employees in the Department of Human Services.

Jerry Foxhoven held a news conference this morning. “Initially I just wanted to move on…then I think there was all this innuendo from the governor’s office and so forth that made it look like I did something wrong,” Foxhoven said. “…It goes back to those 4000 people. They needed to hear from me, ‘I didn’t do anything wrong,’ and that I stood by what I asked them to do which was follow the rules and do the right thing.”

Governor Reynolds has said she wants the agency to move in a different direction and, on Monday, Reynolds said Jerry Foxhoven had not raised any concerns about using agency money to continue paying the salary for a member of her staff. Foxhoven says he first tried to speak with the governor.

“Several months before this occurred I sent the governor a text asking to meet with her and talk to her privately and said it could be very short,” Foxhoven told reporters this morning, “and I never even got a response to it.”

Foxhoven said he did discuss the matter with the governor’s chief of staff shortly before he was terminated.

“The bottom line is I had a phone conversation with her and I made it very clear that I questioned whether it was legal or not,” Foxhoven said.

Foxhoven said the legislature set aside money to pay for a new staff member in the governor’s office and he was concerned he lacked the authority to divert money from DHS operations to continue paying a member of the governor’s staff.

“If they’re saying that they’re denying that I had concerns about that and that I was going to the attorney general’s office, then they’re not telling the truth,” Foxhoven said.

Foxhoven’s lawyer will first file a claim with the Iowa Appeals Board, alleging Foxhoven was retaliated against and forced from his job because he was a whistle blower. Foxhoven’s attorney said it’s unlikely the state will offer a settlement and he expects to file a lawsuit against the governor, her chief of staff, her legal counsel and the State of Iowa in early 2020.

Foxhoven, who is an attorney, said he’s looking for his own “next adventure” working for a non-profit group.

“As I have consistently shared with Iowans, many factors went into my decision to ask for Jerry Foxhoven’s resignation,” Reynolds said. “Foxhoven never raised concerns with me or my staff about the salary agreements in question, and he never asked my staff for a legal opinion or said he would be reaching out to the Attorney General’s office for one. I would never ask anyone to do something they thought was illegal. My focus remains on the many Iowans that DHS serves, and I am committed to selecting a new director who will take this agency to the next level.”

(This posted was updated at 4:13 p.m. with additional information.)