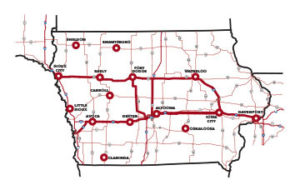 MidAmerican Energy Company is launching what it calls a first-of-its kind network of electric vehicle fast-charging stations in more than a dozen cities throughout the state.

MidAmerican spokesperson Tina Hoffman says the plan is to have the chargers available every 50 miles. “One of the barriers to electric vehicle adoption is something they call range anxiety,” according to Hoffman. “If people feel like they don’t know where the next charger will be or how far they can get before they need to recharge to reach their destination — there’s a fear in investing in that vehicle.”

MidAmerican wants to install DC fast-charging sites in Altoona, Avoca, Carroll, Clarinda, Davenport, Dexter, Early, Emmetsburg, Iowa City, Fort Dodge, Little Sioux, Oskaloosa, Sheldon, Sioux City and Waterloo, which are all within the company’s service territory. She says they are looking for partners to host the chargers so people can use them to charge their electric cars. Hoffman says this type of charger can get people on their way after a short stop.

“Those can generally charge an electric vehicle in about 20 to 45 minutes. So, a stop at the gas station, or you can run into the store, and you car will be charged by the time you get out,” Hoffman says. She says they will leave it up to the partners who provide the chargers to determine the cost of a charge.

Hoffman says the company is also providing grants to help people buy electric cars. “MidAmerican Energy customers who buy or lease a new electric vehicle can get a 500 dollar rebate incentive for doing that,” Hoffman says. She says the company is also providing 15-hundred dollar rebates for those who install a “Level 2” charging station, which generally charge electric vehicles in 4 to 8 hours.

The company plans to begin building the charging network by the end of the year. Hoffman says encouraging the use of electric vehicles goes along with their plan to eventually provide 100 percent of the electricity to their customers from renewable sources. Hoffman says the company now provides on average through the year more than 50 percent of its electricity from renewable sources.