You are here: Home / News / Century-old sewing factory in Dyersville reopens as brewery 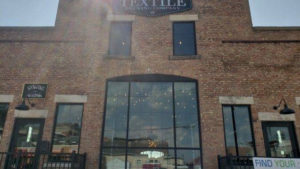 Today  is the grand opening for a former sewing factory in downtown Dyersville that has been converted into a brewery.

Carol and Tom Olberding have named their business the Textile Brewing Company. “It started when I moved to Iowa almost five years ago and discovered breweries and craft beer and just became obsessed,” Carol Olberding says.

She grew up in Europe, met her husband in Georgia and the couple moved to his Iowa hometown.

Olberding says her husband liked the chemistry of the beer and she loved the business.

“Then I realized one day that I was going to open a brewery and I told him and he said: ‘You’re nuts. We’ve never made a cup of beer in our life,'” Olberding says. “And I said: ‘I don’t know what to tell you. I just know I’m going to open one.'”

Olberding says her husband is a chemist who went “hard core home brewer” about two years ago when Dyersville’s economic development director offered to help the couple apply for a grant to open a brewery in the historic building.

The sewing factory closed in 2017 after nearly a century in operation. In 2018, Dyersville Economic Development Corporation bought it to anchor the community’s drive to renovate its downtown buildings and then sold it to the Olberdings. The couple has two ales named after the local Dyersville schools. People who buy one of those pints can designate 10 percent of the purpose price to one of those schools.

“We knew that since we were opening a brewery in Dyersville that we would be catering to a Busch Light crowd, so we knew we had to come up with a craft beer, a local beer made with local water and by local people, that would satisfy everybody and not make them want to run out and buy a case of Busch Light,” Olberding says.

The brewery’s light ales are low-alcohol content and Olberding describes it as “easy drinking.”