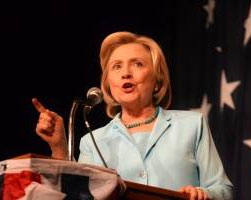 Hillary Clinton at the 2015 Wing Ding.

Twenty-two of the candidates in the Democratic presidential race plan to be at the Surf Ballroom in Clear Lake this Friday night for the “Wing Ding.”

About 1800 tickets for the annual event have been snapped up.

“We’re sold out,” he said late last week, adding there will be a couple of hundred event campaign staff, reporters and event volunteers in the ballroom as well as ticket-holders.

Wing Dings of the past have featured large crowds. In 2007, future 2008 Iowa Caucus winner Barack Obama was the Wing Ding’s keynote speaker. By 2015, four candidates — including Hillary Clinton and Bernie Sanders — were the main draw.

“That was a sell-out and that was huge, but I really, really think this one here is going to be even bigger,” Black said. “It’s just going to be crazy.”

For starters, there are more than five times as many candidates as there were at the Wing Ding four years ago. Each candidate will be given five minutes to speak on stage this Friday night. It’s the same stage where music legends ranging from Duke Ellington to Buddy Holly have performed. In addition to the 22 presidential candidates who’ll take the stage this Friday night, Black says a “special guest” will speak to the crowd, too.

“We will announce that special guest on Friday, at the event,” Black said. “I love surprises.”

Black is sharing a hint, though, that the person is a “foreign dignitary.”

The first “Wing Ding” was held 16 years ago to raise money for three county parties. It’s grown to seven host counties and another 28 county parties sell tickets, getting to keep $12 from every $35 ticket sold.

Black said boosting the bank accounts of county parties is part of the Wing Ding’s legacy. Another goal is to give Iowa Caucus-goers a venue to evaluate the candidates.

“They deserve to see up-front who they’re going to choose come Caucus Night in February,” Black said, “and we’re just one of those tools to make it happen.”

The Wing Ding’s website indicates the event will kick-off around 5 p.m. Friday.