You are here: Home / News / We could see some rough weather today 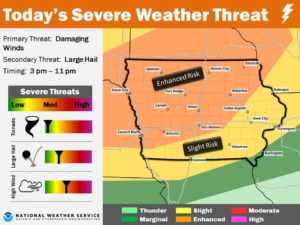 You should keep a radio close this afternoon as forecasters say severe weather is a possibility.

Meteorologist Cory Martin, with the National Weather Service in Johnston, says Iowans should monitor the forecast closely and have a place to seek shelter, should it be necessary. “The severe weather threat encompasses much of the state,” Martin says. “The greatest threat generally stretches across northern and down into central Iowa, especially as we get into the late afternoon and evening hours.”

Tornadoes are a possibility, Martin says, in addition to other threats. “Late afternoon and early evening, across northern Iowa, there’s the potential for large hail and damaging winds,” Martin says. “The later into the day we go, we expect a transition into more of just a strong wind threat and the potential for heavy rainfall as the storms continue to drop south.”

Martin suggests Iowans make sure they have multiple ways to receive severe weather warnings, including the radio, weather radios and smartphone alerts. He predicts the storms will be out of Iowa by early Tuesday, giving way to dry conditions tomorrow.