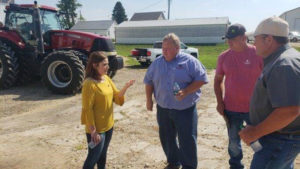 Congresswoman Finkenauer with an FCC member on an Eastern Iowa farm.

Iowa Congresswoman Abby Finkenauer hosted a member of the Federal Communications Commission on a Dyersville farm Monday to highlight the need to ensure farmers have access to broadband.

“That’s so important for their yields and for their margins and also it’s good for the environment to have precision ag, knowing where you’re putting the fertilizer on or where the good ground is,” Finkenauer said. “This is the type of stuff that a lot of folks don’t understand that we’re doing here in Iowa.”

Finkenauer, a Democrat from Dubuque, has introduced a bill that calls on the FCC to collect more specific information about where high-speed internet access is and is NOT available. Current reporting lets internet providers claim an area of up to 8000 residents has access when broadband has been extended to just one customer in the area.

“Then we need to have the investment in our infrastructure to
update and make sure that we don’t leave anybody out here,” Finkenauer said.

Federal Communications Commissioner Jessica Rosenworcel said when people talk about the “digital divide” in America, they don’t talk enough about the impact on agriculture.

“Agriculture is changing. It’s being digitized and we need to figure out how to take advantage of that,” Rosenworcel said, “so farmers have a bigger and brighter future.”

Jeff Pape, the farmer who hosted Finkenauer and Rosenworcel, said broadband is essential to not only manage how his equipment navigates his fields, but to communicate with suppliers like the local coop.

“We’re already talked about a fertilizer program for the fall, so they track me. They know how many bushels an acre we’ve taken off a field. They can adjust the fertilizer rate accordingly. They can pull in right behind me, without me calling them and communicating it,” Pape said, “so that data is a constant transfer stream.”

After visiting Pape’s farm, Finkenauer hosted a roundtable discussion in Cedar Rapids about broadband access. Finkenauer is a member of the Rural Broadband Taskforce in the U.S. House.