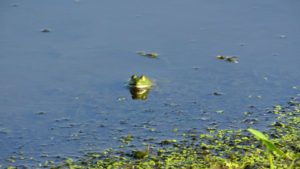 Bullfrog enjoying the water at DeSoto.

High water due to prolonged flooding at a southwestern Iowa nature preserve is changing some of the habitat and a few species are taking advantage of it.

The DeSoto National Wildlife Refuge typically sees a dry period at this time of year, but last spring’s flooding has kept a lot of water around. Park Ranger Peter Rhea says some species have adapted well.

“We’ve seen a lot more herons feeding in the flooded water, feeding on all the fish and stuff like that,” Rhea says. “We’ve seen a ton of frogs, way more frogs than we’ve ever seen, that have benefited from all that water.”

Rhea says not all species in the 8,300 acre refuge have adapted, as their usual grassland habitat has turned into wetlands.
“With the flooding, a lot of the pheasants that need that upland, grassland habitat, obviously a lot of that is now wetland water,” Rhea says. “You’re not seeing as many pheasants. The same can be said for species like quail.”

Rhea says he’s interested to see what the fall migration holds. He says more birds like eagles could come in and feed on the fish trapped in shallow water.

(Thanks to Katie Peikes, Iowa Public Radio/Photo from Ranger Rhea.)