You are here: Home / Fires/Accidents/Disasters / Trooper gives advice if you encounter a wrong-way driver 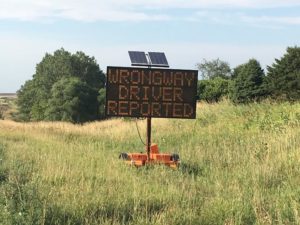 Two people died in a fatal wrong-way crash on Highway 30 Sunday night in Cedar Rapids — making it seven deaths from wrong-way crashes in eastern Iowa since 2016.

He says flashing your headlights at the other driver might help, but honking your horn at them won’t work as they don’t hear it. Conrad says if you are driving and see a car going the wrong way toward you — you should move to the right-hand lane and shoulder as quickly as possible while hitting the brakes.

He tells KCRG TV that just by slowing down, drivers are reducing the chance someone is hurt, even if they are hit.  “When you have two vehicles coming at such a high rate of speed, when they hit, the potential for that fatality crash is huge,” he says Conrad said to never assume the wrong-way driver will pass you. “If I see someone coming at me with headlights in my lane, I’m going to get over to the side of the shoulder as far as I can and stop my vehicle,” Conrad says.

Most importantly, he says drivers need to always pay attention, especially at night. “If you’re distracted, you’re not seeing danger coming at you at 70 miles-an-hour,” according to Conrad. The trooper says you should call 911 as soon as you can if you see a wrong-way driver.