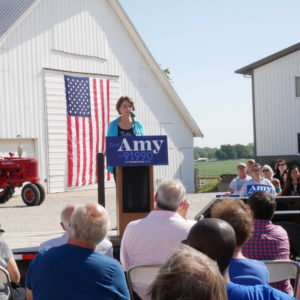 Democratic presidential candidate Amy Klobuchar gave a speech on a central Iowa this morning to highlight what she calls her “heartland economics,” Klobuchar began by talking about this weekend’s mass shootings. She called for passage of universal background checks and a waiting period for gun purchases.

Klobuchar said the so-called “boyfriend loophole” must be closed, too, so stalkers
and abusers don’t have access to guns. Klobuchar, a U.S. Senator from Minnesota, said it’s important for “rural voices” to join the call for gun safety measures.

Klobuchar noted the Republican congressman who represents Dayton, Ohio has just called for an assault-weapon ban as well as new limits on the amount of ammunition allowed in the magazine or clip that’s attached to a gun. Klobuchar told reporters President Trump has the power to get Republican senators to take action.

“When his party seems to always be ‘How High Can I Jump to Keep You Happy’ as their motto, there is absolutely no way he couldn’t get this done,” Klobuchar said after her speech. 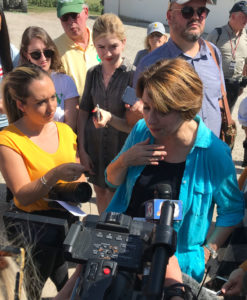 For about half an hour this morning, Klobuchar spoke to a crowd at a farmstead near Ankeny about proposals to address ag-related issues, including the end of waivers that let big oil companies escape the requirement to blend ethanol into gasoline.

“I will completely overhaul the refinery waivers, all right? We need transparency,” Klobuchar said, to cheers. “…Memo to the Trump Administration…no one, when this got put in place, thought it would cover Chevron and Exxon.”

“I can tell you this: I will not be using a meat cleaver — or should I say a ‘tweet cleaver’ — when it comes to our policy on trade,” Klobuchar said.

Klobuchar is one of more than 20 presidential candidates who’ll be campaigning in Iowa this week. She’s embarking on a tour with stops in 20 counties and a visit to the Iowa State Fair.  Former Texas Congressman Beto O’Rourke told reporters in his hometown of El Paso this morning that he would not be visiting the Iowa State Fair and did not know when he might return to the campaign trail.