You are here: Home / Education / Women from Kosovo to study energy programs at DMACC 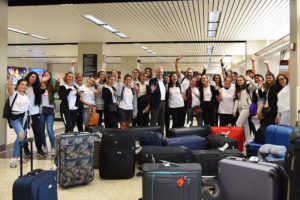 Twenty-eight women from Kosovo arrived in Des Moines Monday as they prepare to start learning things like how to work on wind turbines at Des Moines Area Community College (DMACC).

The dean of the college’s industry and technology department, Jenny Foster, says they are part of the Women in Energy Scholarship program “The Millennium Foundation is providing scholarships for Kosovar women to study energy-related fields here at DMACC,” Foster explains. “And so, women were able to select  from multiple programs, including our wind program, solar, industrial maintenance, C and C, welding.”

The Millennium Foundation is providing a grant of up to one million dollars for the students. Foster says DMACC has been growing its relationship with Kosovo as an extension of Iowa’s involvement with the country.

Foster says the Kosovo women will do the same things that other students do on the Ankeny campus. “They’re going to go through orientation, and they’ll meet with their advisors and they’ll be with all the other students in all these different  programs,” Foster says.  “One thing I am really excited about — in all these skilled trade areas we don’t always have a lot of women — so I am very excited to add some diversity to our program.”

She says they were originally going to take five students, but there were more than 100 who applied, so the program funding was expanded.  Foster says Kosovo has the same need that Iowa and other states do in finding these types of workers.

“The plan is that they would go back to Kosovo and apply and take some of these jobs in the energy-related sector, so they can expand some of their industry,” according to Foster.   The 28 Kosovo students have a mix of educational backgrounds.

“It’s a pretty diverse group. Some are coming right from high school, some have a bachelor’s degree at their university, but they don’t have these  specific technical skills,” Foster says. “We are going to get them started right away. We have some programs in place to make sure they are successful.  We also have someone who will be planning regular events so they can see the community.”  One of the events already on the schedule is a trip to the Iowa State Fair.

DMACC President Rob Denson and Kosovo’s Minister of Education signed a Memorandum of Partnership last year, and Denson has traveled there several times.  The relationship between the State of Iowa and Kosovo began in 2011 with a partnership between the Iowa National Guard and the Kosovo Security Force.

The first diplomatic consulate in the state was opened by Kosovo in Des Moines in 2016.