You are here: Home / News / Biden says Americans are weary of Trump’s ‘hokum’ 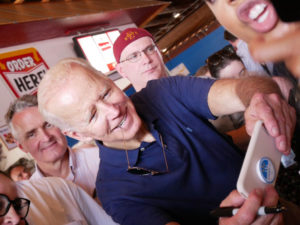 Joe Biden takes a selfie at the Iowa State Fair.

Former Vice President Joe Biden stressed repeal of the Trump-era tax cuts as he addressed a large crowd at the Iowa State Fair this afternoon.

“So much in tax breaks for people who don’t need them and by the way, the wealthy know they don’t need them. They’re not bad people. They don’t need another tax cut,” Biden said. “If you’re making more than 10 million bucks, man, I’m not your guy. You don’t need a tax cut and you know it.”

Biden said because of the tax rate on capital gains, the top one percent pay less in income taxes a teacher, fire fighter or a cop.

“It’s ridiculous,” Biden said. “We should be rewarding work, not just wealth.” 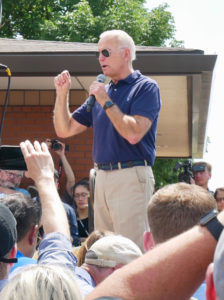 Biden speaks at the fair.

Biden, speaking on The Des Moines Register’s Political Soapbox, also addressed critics who question whether he’s the best Democrat to face-off against Trump in 2020.

“On one side they make: ‘Well, Biden’s kind of been around too long.’ The other side is: ‘Biden’s naive.’ Well, I don’t know I’ve been around a long time and you’d think being around a long time you’d learn a little something, you know,” Biden said, getting laughs and a whoop from the crowd. “And the thing I’ve learned is that the American people after four years, after three years already of this guy have decided that a lot of what he’s talking about is hokum.”

The crowd pressed around the outdoor stage on the fairgrounds to listen to Biden speak. Gary Pint made the trek from Waterloo, on his birthday, to be there.

“He rises to the occasion. He’s consistent. He tells the truth. He doesn’t incite situations,” said Pint, who has narrowed his choices in the 2020 race to Biden and Beto O’Rourke, the former Texas Congressman.

Montana Governor Steve Bullock spoke on The Des Moines Register’s Political Soapbox about an hour before Biden. Bullock told the crowd at some point Trump will have to answer for his divisive rhetoric. 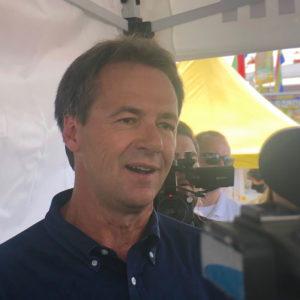 “Our kids learn from our words and our deeds — what we say and what we do — and our kids are watching today,” Bullock said, drawing cheers and applause “We need to make sure we give something for them to aspire to and be inspired by.”

Bullock linked action on gun-related measures to his call to reform campaign finance laws and require public disclosure of all political contributions.

“We can finally break that dark-money stranglehold of the NRA and address gun safety for all Americans because nobody should be afraid to go to school or an outing like this,” Bullock said, to cheers.