You are here: Home / News / C-SPAN bus travels across Iowa on education mission 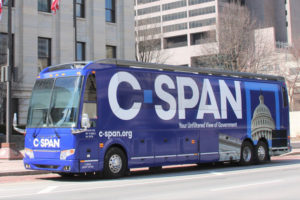 With the Iowa State Fair underway and another influx of Democratic presidential candidates campaigning in the state, the C-SPAN Bus is making its way through Iowa.

The public affairs network’s Jenae Green says their nationwide educational bus tours have been taking place since 1993 in an effort to help people better understand what happens in Washington D.C.

“We just want people to come inside, whether you know about C-SPAN or not, whether you’re civically engaged to know everything about your government, or just curious and you want to learn more and gain information,” Green says. “We provide you with a place to not only have a little bit of fun, but also gain information about your elected officials, your government, and how things work in D.C. that affect you personally right here in Iowa.”

The bus will visit middle schools, high schools, universities, public libraries, and special events like the Democratic “Wing Ding” event Friday in Clear Lake. Green says when you step inside the bus, it’s just a little bit of Washington D.C. brought to the community. “You’re greeted by tablets that have different videos and quizzes of Congress, the White House, the Supreme Court, anything that’s going on in D.C. that just gets you a little engaged and excited about your government,” she says. “When you go to the back of the bus, there’s a D.C.-themed selfie station which allows you to pretend like you’re reporting live from the set, in front of the White House.”

There’s also a 360-degree camera that shows you different places in D.C. and around the country in a full mobile studio, so that you get to experience not only news and nonpartisan coverage of your government, but everything that C-SPAN has to offer when it comes to seeing your government live in action and unfiltered. The bus is not only for adults, but students. Green says kids will even have the opportunity to win cash.

“We highlight our student-cam competition, which is a video documentary competition that we do every year for students, grades six through 12, where they can make their voices heard about their government,” she says. “It’s a five-minute competition. The grand prize is $5,000 and we give over 150 prizes out nationwide.”

The bus is in Fort Dodge this (Thursday) afternoon. It will be at the Mason City Public Library on Friday from 10:30 A.M. to 1:30 P.M., and then it heads over to the Surf Ballroom in Clear Lake where the public can tour it from 4:00-6:15 P.M. The bus will be at the Iowa State Fair this Saturday through next Wednesday in the West Grand Exhibit Area, south of Gate 11.