You are here: Home / Crime / Courts / Cedar Rapids has some ticket glitches as it restarts traffic cameras 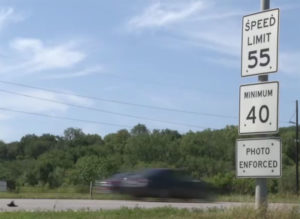 The city has since found errors in some of the 6,000 citations sent out in the first four days of operation Cedar Rapids city administrators said tickets would only be issued for drivers going more than 66 miles an hour — but Doug Wolcott told KCRG TV9 he got a ticket even though he was under the level set.

“I couldn’t believe it,” Wolcott says. Wolcott says the ticket showed he was going 60 in the 55 zone and was he was surprised the ticket was even sent out. “I got to looking at it and it was only five over — I didn’t think that was the case,” Wolcott says.

Cedar Rapids Police Chief Wayne Jerman  told KCRG TV9 that Wolcott was one of 12 drivers who got tickets but shouldn’t have. Chief Jerman says all of the data goes to the camera vendor, Gatso, for processing and is then sent to the Cedar Rapids Police Department. An officer then makes a decision to send out a citation.

“When you have the human element mistakes can be made,” Jerman says. Chief Jerman said the 12 citations will be dismissed.
“We strive for 100 percent — but if we don’t meet 100 percent we’re going to admit our mistake and take corrective action necessary,” according to Jerman.

Cedar Rapids City Council member Ashley Vanorny says the ticketing process is not perfect and encouraged anyone with concerns to contact officials. “Regardless of whether someone is here as a commuter or they’re here as a resident, we need them to speak up. And we’ll continue to work on that process to make sure we’re holding up our end of the bargain,” Vanorny says. Data for the rest of the month of July is still being processed.

The city said there could potentially be more tickets issued by mistake and that anyone who receives a ticket they feel was wrongly issued should contact the police department.