You are here: Home / Fires/Accidents/Disasters / Crop duster crashes in Sumner near Main Street 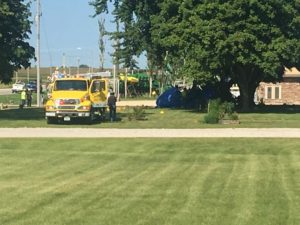 (Update) Sumner police have released the name of the pilot who died. They have identified him as 56-year-old David Baker of Swedesburg.

The National Transportation Safety Board (NTSB) is now the investigating agency.

Investigators are on the scene of a deadly airplane crash in the northeast Iowa city of Sumner.

Bremer County officials confirm the pilot was killed when a crop duster went down around 7:30 a.m. on the west side of the community. Investigators believe the pilot was the only person on board. According to officials, the plane hit the ground and burst into flames in front of a business along Iowa Highway 93 (Main Street).

Witnesses told police that a wheel came off the low-flying plane when it hit a power line, which knocked out electricity to part of Sumner. Officials say the wheel hit and shattered the glass front doors of a bank, but no other businesses were damaged. No one on the ground was injured.

The name of the pilot has not been released.