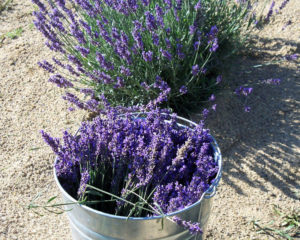 A farm in the Loess Hills of southwest Iowa where corn, soybeans and cattle were once raised is now home to acres of wildflowers and lavender.

Mary Hamer and her husband, Tim, run the Loess Hills Lavender Farm near the Harrison County town of Missouri Valley. The peak months are July through September for the undulating ocean of delicate purple flowers.

“People are allowed to go and cut a small bouquet,” Mary Hamer says. “Right now, we’re a little short because the first cuttings have been pretty much cut, but then we rebloom until it freezes again. By the end of August and September, we’ll have a nice stand of lavender again.”

The farm hosts events like teas, luncheons and weddings while the gift shop is filled with items like lavender-infused lemonade, lavender cookies and even lavender fudge. “We make all of our own products, lotions, balms and spritzes,” Hamer says. “In researching lavender, it’s an amazing herb that you can cook with, clean with, and heal with. It’s got a lot of great properties in it. Our lotions and balms are good on bug bites.” 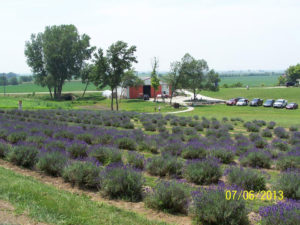 The Hamers, originally from the Pisgah and Little Sioux areas, bought the farm ten years ago after spending a few years researching lavender. They were struck by the idea when on the West Coast to visit their son, who was in the Navy.

“We were waiting for his submarine to come in and my daughter-in-law said there was a lavender festival in Sequim, Washington, and that’s where I wanted to go,” Hamer says. “We went up and I walked in the field and my very first thought was, ‘I’ve gotta’ do this is Iowa.'”

The aroma of lavender can be intoxicating and when there are acres of the purple plants, Hamer says many people find it’s the perfect place for snapping selfies — or forgetting about echnology entirely.

Hamer says, “The hills are beautiful and people can come out and just relax and enjoy themselves and maybe find a little inner peace here.”