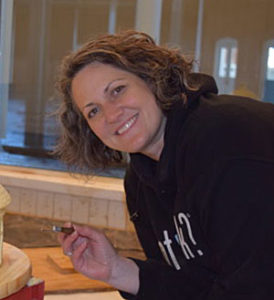 The iconic “butter cow” has been a part of the annual Iowa State Fair since 1911 and Sarah Pratt of West Des Moines sculpted this year’s dairy cow — as she’s done each of the past 18 years.

“Really any kind of butter works, although if I have access to it, low moisture butter — so butter that’s been churned for a longer period of time — works better,” Pratt says. “I typically used recycled butter, so it in effect does the same thing. As I use it year-to-year-to-year, it reduces the moisture and becomes more like clay.”

“Here at the Iowa State Fair we have a lovely, very long stretch of cooler, so I can put inside the cooler a cow and also a themed-sculpture,” Pratt says.

Pratt marked the 100th anniversary of John Deere during the 2018 Iowa State Fair and sculpted — out of butter — a replica of the “Waterloo Boy” tractor.

“It was extremely difficult in the sence of trying to get the scale just right and all the details,” Pratt says.

This year, fair-goers who pass through the Agriculture Building may see the figures Pratt has made to celebrate a long-running children’s television program.

Pratt uses about 1200 pounds of butter for her Iowa State Fair carvings.