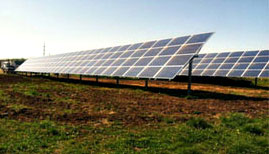 Some Iowa lawmakers are touring businesses that use solar panels in the wake of a proposal that would’ve allowed utilities to charge new fees to solar customers.

Russell Vannorsdel is vice president of Fridley Theatres, an Iowa-based company that recently built a large movie theater in Waukee with solar panels that should save money on electricity. Vannorsdel is considering adding solar panels at two more theaters, but it all comes down to the return on investment, or ROI.

“Any time there’s added cost that could reduce the ROI or not make sense to do a project, it’s something we have to factor in,” Vannorsdel says. “I do believe that legislation would end up impacting what we would do in the future.” Des Moines-based MidAmerican Energy argues the proposed fees are needed because solar users aren’t paying their fair share for maintenance of the electrical grid.

Businesses that want to use solar panels worry this would make it take a lot longer to start saving money. The bill failed to pass in this year’s legislative session, but it could come back in 2020 because it had a lot of Republican support.