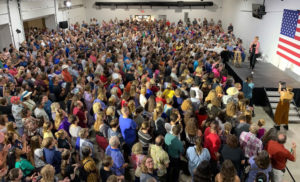 “We have a gun crisis in this country,” Warren said Wednesday.

Warren spoke to a crowd of more than a thousand in Council Bluffs last night. Warren said Republicans in congress have been under the control of the National Rifle Association for too long.

“We’re going to get rid of the filibuster and we’re going to pass some serious gun legislation in this country,” Warren said, to cheers.

According to Warren, the NRA has spent nearly five-million dollars each year in lobbying efforts has crippled any substantial reform in the nation’s gun laws.

“The Republicans are held by the throat by the NRA,” Warren said. “Enough is enough.”

Warren continues her swing through western Iowa today and tomorrow with stops in Harlan, Jefferson, Fort Dodge, Humboldt and Clear Lake. She is scheduled to speak at the Iowa State Fair Saturday.