You are here: Home / Human Interest / Captain is the biggest boar at 2019 Iowa State Fair 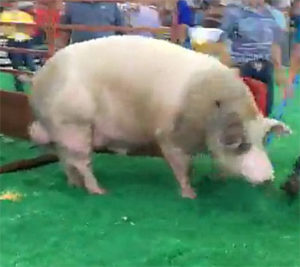 The 2019 Iowa State Fair’s Big Boar tipped the scales Thursday at 1,254 pounds. They call him Captain.

“We wanted to come up with a name that had authority,” said Tricia Britt of Monticello.

It’s the first time she and her husband, Bryan, have entered one of their boars in the biggest of big state fair contests.

“We’ve never been here before and we’ve never watched the ‘Big Boar’ show, but we knew about it,” Tricia Britt said. “Brian has a cousin that has done it.”

Captain, who is three-and-a-half years old, was the heaviest of six boars entered in Thursday’s State Fair competition. Each entrant was paraded into the Swine Barn’s show ring and weighed as a crowd on bleachers watched and cheered.