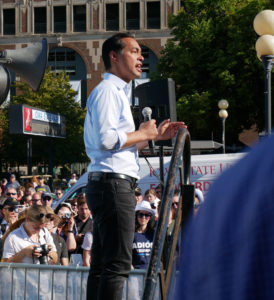 Castro released his plan this morning, then spoke at The Des Moines Register’s Political Soapbox at the Iowa State Fair. Someone in the crowd asked Castro why he wasn’t in El Paso with former Texas Congressman Beto O’Rourke.

“I don’t think what they need is more presidential candidates over there. What they need is us expressing our support and what they really need is action,” Castro said, to applause and cheers from the crowd. “They need congress, they need Mitch McConnell to get the Senate back in session and to pass common sense gun safety legislation. That’s what we can do for the people of El Paso and Dayton and everywhere else.”

Castro praised O’Rourke for what O’Rourke has done and said in his hometown of El Paso this past week.

Castro will be among the 16 candidates who speak tomorrow at a gun policy forum in Des Moines.