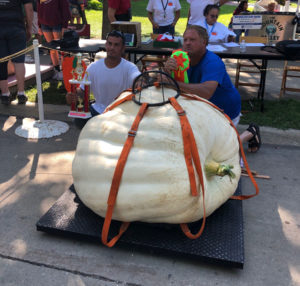 Donald Young and Tommy Rhodes with their winning pumpkin.

Their behemoth had to be lifted onto the scale using bungee cords and a forklift.

“This pumpkin was 760 pounds, but it’s basically a baby. It’s only 39 days old,” said Donald Young of Des Moines.

He has held the state record for 12 years, though his ambition is to set the world record for heaviest pumpkin. The current record is 2624 pounds. 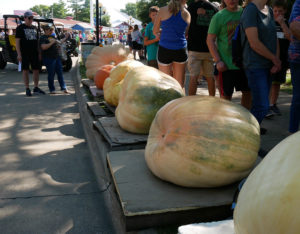 Two years ago, Tommy Rhodes joined Young’s effort to grow pumped up pumpkins. The seeds they plant are literally known as “American Giants.”

“It’s not just plant a seed and watch it grow,” Young said. “It’s a lot about food and watching, seeing what the plant needs and making sure it gets exactly what it needs.”