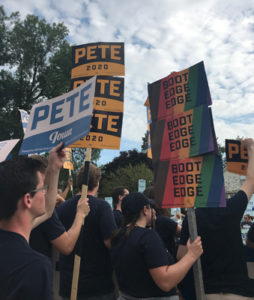 Democratic Party faithful from four northern Iowa counties hosted the largest gathering yet of Democrats for president in 2020 at the iconic annual Wing Ding event in Clear Lake. Twenty-two candidates were allotted five minutes each to introduce themselves – or remind future caucus voters why they are still viable party leaders since the 2016 election.

“Farm plans for too long have been about big ag. We need to have the courage to break up big ag, to fight against big ag, to say no more sucking every last dollar out of the pockets of our independent farmers,” Warren said to loud applause.

The loudest applause before, during and after he went on stage, was for Mayor Pete Buttigieg, Mayor of South Bend, Indiana.

In his five minutes, Buttigieg did not directly call President Trump a white supremacist, but says he is “coddling white nationalism.”

He said the flag does not belong to any one party and symbolizes that “we are able and indeed sometimes required to be critical of our leadership and when we do nobody will question our loyalty to the Republic for which it stands, let alone tell us to go back where we came from.”

Other candidates targeted the president more harshly. Vermont Senator Bernie Sanders vowed to defeat the “most dangerous president in the history of this country.”

“Together, we will end the racism and the sexism and the Islamophobia, and the homophobia and all the other phobias that this president exhibits. And we will end white nationalism in this country as well.”

New Jersey Senator Cory Booker spoke after a somber video speech by former congressman Beto O’Rourke, who chose to stay in his hometown of El Paso after the past week’s mass shooting targeting Hispanic shoppers, to ensure his community is “strong and fortified.”

Booker, picking up on O’Rourke’s tone, began quietly with a charge to the more than 1,200 party faithful in the ballroom:

“This is not a referendum on one guy and one office – this is a referendum on us and who are we to be to each other. This is one of those moral moments in our nation that’s going to define the character of our country and this is a week where I will not let the slaughter of our fellow citizens just disappear within the next media cycle,” he said to applause.

Booker quickly ramped up – bringing the crowd to one of a handful of standing ovations of the night, as he described being a witness to gun violence and was inspired by community leaders who did not leave.

“Now more than ever, we need Americans that will stand up with faith in our country and faith in ideals, faith in each other and come together again and stand together and work together and love together and overcome his darkness with our light,” Booker exclaimed.

Economist and entrepreneur Andrew Yang celebrated Thursday’s news that he had qualified for next month’s televised Democratic debate. The self-described “Asian man who loves math,” says winning the election is about math — in Iowa.

“Why are so many presidential candidates coming her to Clear Lake, to you all? That’s because you hold the future of the country in your hands. Look around you right now, there are about 12-hundred Iowans in this room. I’ve done the math; do you know how many Californians each Iowan is worth? One thousand Californians—each of you,” Yang said to laughter. 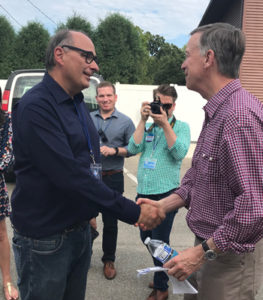 Former Obama advisor David Axelrod, who had success in Iowa in two presidential campaigns, talks with former Colorado Gov. John Hickenlooper, who is struggling to get a foothold in the Democratic race.

Nine candidates have qualified for the next national debate.  Obama campaign strategist and now CNN analyst David Axelrod says tiers are developing in the race.

“It’s early for the people who are in the top tier and there can be a lot of fluidity in that top tier. It can be tough for the people down below to work their way into the top tier just because there is only so much oxygen,” Axelrod said to Radio Iowa outside the Surf Friday night.

Wing Ding ticket-holder Carol North of Mason City listened carefully to each candidate and sees the field starting to separate. She said she has not picked a favorite but “I know some who need to go.”