You are here: Home / News / A full weekend of Iowa Caucus campaign activity 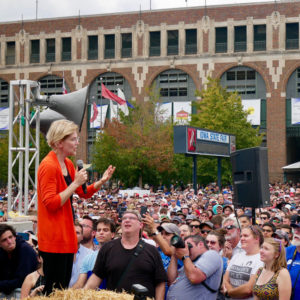 A procession of presidential candidates cruised through the state this weekend.

“Hello, Iowa State Fair,” Massachusetts Senator Elizabeth Warren yelled as she greeted a massive crowd Saturday on The Des Moines Register’s Political Soapbox at the Fair and she started by reciting the three words at the core of her candidacy.

The crowd cheered louder in response. Next up was New Jersey Senator Cory Booker. The crowd chanted, “Cory, Cory,” as he took the stage and Booker chanted his reply: “Thank you, thank you.” Booker emphasized a unity theme.

“This is a moral moment in America…There are forces every day trying to tear our country apart along racial lines or along partisan lines,” Booker said. “…I’m running for president of the United States because I believe in us.”

Seven other candidates spoke at the Fair Saturday. A handful more were there Sunday, including former Massachusetts Governor Bill Weld, a Republican who is challenging President Trump.

“The Republican in Name Only because he’s not a fiscal conservative,” Weld said. “…He doesn’t believe in free trade.”

Also this weekend, most of the Democratic presidential candidates addressed advocates from around the country who gathered in Des Moines for what was called a “gun sense forum.” Former New York City Mayor Mike Bloomberg pledged to dip into his fortune to back like-minded candidates up and down the ticket.

“In 2020, we’re going to show just how strong our movement has grown,” Bloomberg said.

Kamala Harris is the only Democratic presidential candidate who’s still campaigning in the state today. This weekend, Harris was endorsed by former Iowa Democratic Party chairwoman Sue Dvorsky and her husband, Bob, a former state senator. Sue Dvorsky has worked with Democratic activists throughout the state for decades and was an early backer of Barack Obama in 2007.