You are here: Home / Business / Governor proclaims this ‘wind week’ in Iowa 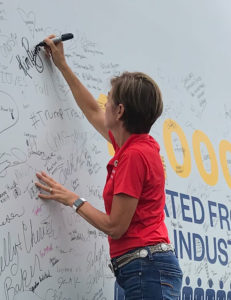 A 185-foot-long wind turbine blade positioned on the northwest corner of the Iowa State Fairgrounds was the site of a ceremony today.

Governor Kim Reynolds signed the blade and signed a proclamation declaring this “wind week” in Iowa. “As the governor of this state, I certainly understand the importance that renewable energy has not only for Iowans, but for our economy,” Reynolds said.

According to American Wind Energy Association CEO Tom Kiernan, more than 9000 people are working in 10 different Iowa factories that are making things like wind turbine towers and blades.

“I was in Washington, D.C. with a wind tech from Iowa talking about the jobs and he corrected me. He said: ‘No, no, no. This isn’t just a job. This is a career,'” he said. “….We’re having, because of the training programs, more people stay in Iowa and rural America.” 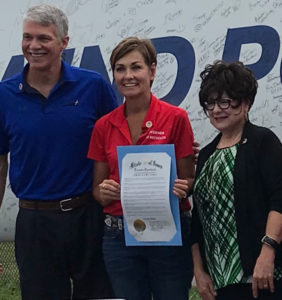 “Indeed, businesses are increasingly focused on their environmental footprint and the fact that we can power a production economy with affordable, reliable and renewable energy is a powerful calling card for our state,” Durham said. “It’s one of the many reasons sustainability-minded businesses like Facebook and Apple and Google have chosen Iowa.”

By 2020, Iowa wind turbines are projected to account for 40 percent of the energy produced in the state.