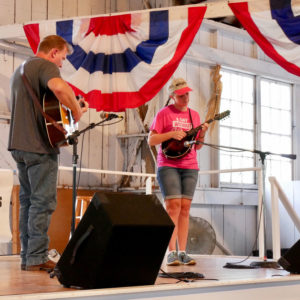 Kaitlyn Briggs and her father on the Iowa State Fair stage.

The 2019 Iowa State Fair has been an instrumental experience for one particularly talented teenage musician in this year’s Mandolin Contest.

Kaitlyn Briggs of New Virginia won first place. This is her second year entering the competition. She’s been playing the mandolin for about seven years, though it’s not her only musical talent.

“I’ve played fiddle and I kind of play guitar,” she said, “and I’ve played piano, too.”

After claiming her prize, she played an encore. Briggs was accompanied on the guitar by her father, Galen Briggs.