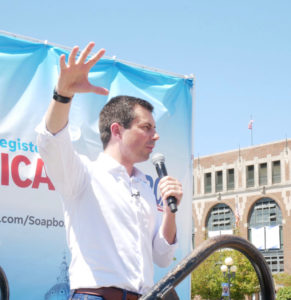 Buttigieg spoke at The Des Moines Register’s Political Soapbox at the Iowa State Fair today and responded to a question from the crowd about Citizens United — the US. Supreme Court ruling that has allowed so-called “super PACs” to accept unlimited and undisclosed contributions.

“If it’s really true that under this constitution we can’t have common sense campaign finance reform, if that’s really true, then time for a constitutional amendment to clear this up once and for all,” Buttigieg said.

In 2011, when Mitt Romney was running for president, he stood on the same “Soapbox” at the Fair and declared “corporations are people, too,” when debating the topic with hecklers. Buttigieg seemed to respond to Romney.

“Money is not the same thing as speech,” Buttigieg said. “…Corporations do not have the same political souls as human beings like you and me.”

Buttigieg was the only presidential candidate on the fairgrounds today. He timed the release of his ideas for bolstering rural America with his Iowa State Fair visit. Buttigieg is proposing “community renewal visas” as a way to address labor shortages in rural areas. He said communities would have to apply to be part of the program and it would provide an incentive for immigrants to settle in rural areas.

“One thing I’ve noticed is that the rural communities that are doing the best are the ones that are growing including through immigration,” Buttigieg said during an interview with Radio Iowa. “I’ve also noticed that the politics around immigration even among rural and conservative people are much less ugly when people actually know immigrants versus where it’s this kind of category they’ve never seen where it’s fear of the unknown.”

Buttigieg  added that he observed during his July 4th visit to Storm Lake that the community is growing “partly because they embrace a diverse population.”

Buttigieg proposes boosting federal incentives for apprenticeships and encourage more “telecommuting” so people may live in a rural area and work from home. That requires expanding high-speed internet access. If there are areas the private sector won’t serve, Buttigieg said a “public option” must be created.

“We’re also going to have to make the most of satellite technology, to streamline the process for getting satellites in low-Earth orbit,” Buttigieg told Radio Iowa, “and I think we can unlock a lot of spectrum for wireless internet and in so doing get some revenue that will help us pay for all of this, too.”

According to Buttigieg, who is the mayor of South Bend, Indiana, experts estimate it will cost about $80 billion to extend broadband to every part of the country.

Buttigieg has campaign events scheduled in southeast Iowa over the next few days.