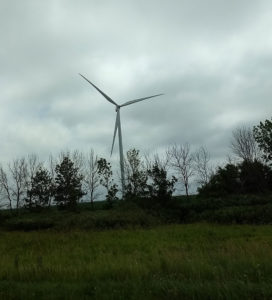 Reynolds says she wants to arrange a meeting with county officials who’re are considering a local ordinance prohibiting wind turbines within a mile and a half of a residence. Madison County Public Health officials say soundwaves from the turbines and the sun reflecting off the huge blades cause headaches and nausea.

Reynolds told reporters late this morning that she wants to review the data. “I’ve sat down with both sides of the equation, so I’ve met with people that have some concerns,” Reynolds said, “and we will continue to do that and make sure that we’re mindful as we move forward.”

“Listen, I support the industry. I’ve said that, you know, until I show some data to show us otherwise,” Reynolds said.

According to the Iowa Environmental Council, there have been no scientific studies linking wind turbines to public health concerns. Reynolds says she’s not an expert in this area, but plans to gather “stakeholders” to discuss this Madison County ordinance.

“I don’t have all the facts in front of me, so if they want to sit down with me and talk to me about some of the information they’ve been gathering, I’ll meet with them. I have before,” Reynolds said. “We’ll continue to bring stakeholders together at the table and try to address any concerns that they may have, listen to what they are, listen to what they are, take a look at some of the data, I’m sure they do, to present to us, we’ll take a look at that.”

This spring, President Trump said “wind mills” cause cancer. Senator Chuck Grassley called the comment “idiotic.” At the time, Reynolds said it wasn’t her place to say whether wind turbines caused cancer. The governor emphasized her support for the industry and said this issue may be like scientific studies about coffee showing one year it’s good for you and the next it causes cancer.