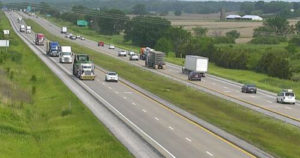 The state fund which pays for road construction has a negative balance of around $80 million one month into the new fiscal year.

The director of the division which oversees construction planning told the state Transportation Commission Monday that will change. The DOT’s Stuart Anderson says they normally plan to be about 20 million dollars above the available money in case some projects run behind.

“Typically in a year we’ll have a project or two where there are some development issues and it is just not going to be put out to bid as anticipated,” Anderson explains. “So, it’s always good to be a little over programmed so you have a project ready to go in its place.”

He says the new fiscal year that started in July they had $50 million more in projects than they had funding for — and then a $30 million bridge project for Highway 2 in the flooded area of southwest Iowa was added. Anderson says they normally take bids on one project each month, but had an unusual circumstance where they had several projects were let.

“We had a letting for that overflow bridge at Iowa 2. We had our normal monthly letting — and then we also had another special letting for some major work happening on the 80-380 interchange west of Iowa City,” according to Anderson. Anderson says the project bids came in higher than expected. He says they are also not yet up-to-date on the amount of new funding coming in and how that will impact the bottom line.

“That number doesn’t reflect any adjustments for actual revenues — because there is a month’s lag in revenues,” Anderson says. “So, we didn’t report the actual July receipts to the Primary Road Fund. We have some preliminary numbers that show those are coming in higher than forecast, so that will offset that number.” The receipts he’s talking about are the gas tax, license fees for cars and trucks, and fees for cars and trucks which are sold.

The bids for the projects came in higher than expected, and Anderson isn’t sure why. “I don’t know that we have come up with definitive answers on that. I think it could be a combination of just the amount of work happening in the state and in the midwest,” Anderson says. “There’s labor challenges in all sorts of areas related to transportation, whether it’s truck drivers or railroads are facing labor challenges as well. So, it’s possible the road construction industry is having some challenges as well.”

Anderson says they will know more about the actual deficit in the Road Program Fund once they get more information in. He says they will then determine if they need to move projects around in the five-year construction plan.