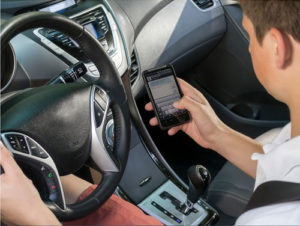 Ben Buenzow, a State Farm agent in Urbandale, says the survey asked drivers about high-tech features like adaptive cruise control and lane keeping assistance. Buenzow says, “These adaptive features are really meant to assist the drivers, not replace the drivers.”

While the slick features were designed to make travel safer, the opposite affect may be what’s happening. He says the national survey found drivers with advanced safety tech in their vehicles are taking more risks on the roads. “It appears that the folks with these adaptive cruise controls and lane keeping assistance and the driving assistance are feeling more comfortable, which is allowing them to utilize more cell phone interaction and things along those lines, versus vehicles that don’t have these adaptive features,” Buenzow says. “The numbers are pretty alarming.”

It’s illegal to text and drive in Iowa and doing so is now a primary offense, meaning, a police officer can pull you over just for texting behind the wheel. Still, drivers with improved safety features admit to flaunting that law more often. “Reading or sending text messages, 62% of the respondents of the survey that have these adaptive driving features in their vehicles are utilizing and reading text messages or sending them, versus 49% that don’t have those features,” he says.

The goal of the survey, Buenzow says, is to make motorists aware of their potentially-deadly mistakes and to spark change. He says nothing should take your attention away from your number-one task — driving safely.