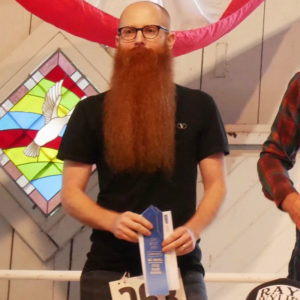 A few dozen men aimed to exhibit their facial hair to win a blue ribbon at the Iowa State Fair, but only three were able to win the judges over for the “best groomed”, “unique” and “best beard with costume” prizes.

Tim Smith of Cambridge has entered the fair’s beard competition nearly 10 times and has earned four blue ribbons in various categories. “Let me tell you, one of my biggest pet peaves is: ‘Well, he’s lazy and that’s why he grows a beard,'” Smith said. “Let me tell you, I spent more time trimming this beard than I ever would shaving.”

Steve White has been the blacksmith in Pioneer Hall at the State Fair for over 25 years — and he’s competed every year.

“I’m either in the beard contest or I would have to shave,” he siad. “It’s mandatory for me.”

Adam Johnson of Dyersville walked away with first prize for “Best Groomed” beard.

“Usually just shower and apply oil and comb it out,” Johnson said. “I haven’t trimmed it at all since day one.”

Johnson said he began growing his beard two years and ten months ago. For the 11th year in a row, Harold Stephenson from Center Point won the prize for longest beard — measuring 40-and-a-half inches.