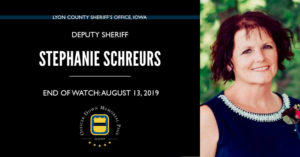 A Lyon County Sheriff’s deputy who was injured after crashing her patrol SUV on Friday has died at a Sioux Falls hospital .

Deputy Stephanie Schreurs died on Tuesday afternoon.  Schreurs was injured when her patrol SUV left the roadway to the left at a sharp right curve, entered the ditch, vaulted a private driveway, and rolled, coming to rest on the driver’s side on the gravel driveway.

The crash remains under investigation by the Iowa State Patrol.

A memorial fund has been established in honor of Deputy Schreurs at Security Savings Bank in Larchwood. Funeral arrangements are pending.

(By Scott Van Aartsen, KIWA, Sheldon/Photo from the Officer Down Memorial Page)