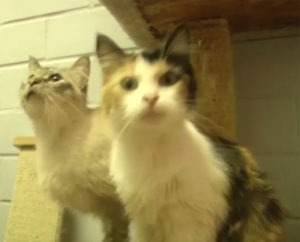 Police in Sumner have charged two women after they found more than one dozen animals dead while searching a home over the weekend.

Last Hope Animal Rescue’s Sonia Brandley told KCRG TV-9 that the animals that were living were ready to leave.  “The cats literally were jumping in my arms to have me take them out. They were so ready to be out of that situation,” Brandley says. She says the dogs reacted the same way. “Once we literally picked them up — you could feel the relief in their bodies — okay we’re getting out of this,” Brandley says.

The search came after reports from citizens raised concerns about the condition of multiple cats and dogs living in the home and unattached garage. Officers say the home did not have climate control and had poor living conditions.