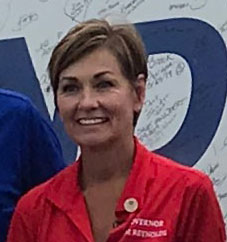 Governor Kim Reynolds says she wants more information about the issues that have caused errors in the state’s distribution of federal welfare benefits and led the feds to fine the State of Iowa $1.8 million.

“I want to know where throughout the region are we seeing the discrepancy, so that I can make sure that we’re targeting the resources to that area,” Reynolds says, “whether that’s educational or maybe additional people or what we need to do to make sure we’re where we should be.”

WOI Television in Des Moines first reported the state had a 10 percent error rate in its distribution of federal benefits commonly referred to as food stamps. The U.S.D.A. notified the state a year ago that its error rate was above the national average.

The fine was levied June 30th of this year. The governor says state officials are working on an action plan after the U.S.D.A. cited the state for inconsistencies in its distribution of food stamp benefits.

“I’m also hoping that the fine that we were assessed, we’ll be working with (USDA) to see if there’s an opportunity for us to take some of that and reinvest it into technology so that we can do a better job of really being more accountable,” Reynolds says.

Reynolds says at this point, state officials do not know why Iowa’s 10 percent food stamp error rate is three percent higher than the national average.

“We serve a lot of vulnerable Iowans and we have state workers that are doing a phenomenal job,” Reynolds says, “but I think there’s opportunities that we can bring to the agency and just some changes that will help them do their job more effectively and efficiently.”

Reynolds says while she’s look for a new DHS director to take a “fresh look” at this problem, she’s not blaming former DHS director Jerry Foxhoven for the higher-than-average food stamp error rate. Reynolds asked Foxhoven to resign in June.