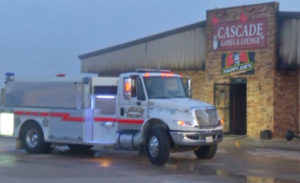 Firefighters in Dubuque County are working to figure out what started a fire that destroyed the bowling alley in Cascade this morning.

Fire crews were called out around 2:40 a-m to Cascade Lanes. Cascade fire chief Denny Green told KCRG TV-9 what they found. “There’s a wall behind the bar area where all you electrical comes in,” Green says, “it appears that was where the fire started in that area there.”

Green says the building appears to be a total loss. “Severe heat and water damage and smoke throughout the building. A lot of heat damage up front. The inside is likely going to have to be completely gutted,” according to Green.

TV-9 spoke to a firefighter on the scene who also works at the bowling alley. He said everything seemed normal as they closed the lanes down Wednesday night. Fire crews from Bernard and Monticello were called to help out and crews remained on scene for several hours to check for hot spots.

The owner of the bowling alley says he will rebuild.