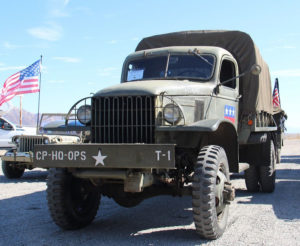 A convoy of olive drab-painted jeeps, trucks and other historic military vehicles will make its way across Iowa next week, part of a journey that’s taking the collection of privately-owned, restored vehicles coast-to-coast.

Jan Gammon, the Lincoln Highway Heritage Byway coordinator for Prairie Rivers of Iowa, says there should be about 60 vehicles in all making the long trek from the East Coast to California.

“People are welcome to line the Lincoln Highway and wave at people as they go by,” Gammon says, “or if they’re stopped in your community for a lunch break or overnight or whatever, the public is welcome to come up and look at the vehicles and talk to people on the convoy.”

This is a recreation of a 1919 convoy that first drove from Washington D.C. to Gettysburg, Pennsylvania, then followed the Lincoln Highway all the way to San Francisco. It was the brainstorm of Henry Osterman, the first field secretary of the Lincoln Highway Association, who led convoys along the East Coast during World War One.

“Just after the war was over, he had this idea to test the nation’s roadways,” Gammon says. “Since he was involved with the Lincoln Highway, he suggested that they take military vehicles across the nation using the Lincoln Highway, so, that’s what they did. They started at the South Lawn of the White House and then headed to Gettysburg.”

The 100th anniversary convoy is a project of the Military Vehicle Preservation Association. A century ago, the original transcontinental convoy included some 285 enlisted men and 24 officers, including a certain ambitious lieutenant colonel.

“The first military vehicle convoy had Dwight Eisenhower on it,” Gammon says. “He later became president and signed in the Interstate Act to create the interstate system, so that’s kind of interesting.”

The convoy is scheduled to cross the Mississippi River into Iowa on August 22nd, passing through Clinton, with overnights stays planned in DeWitt, Marshalltown and Denison. There should be stops in: Lowden, Marion, Belle Plaine, the Tama Lincoln Highway Bridge, Nevada during the Lincoln Highway Days Parade, Boone, Jefferson, Woodbine and Missouri Valley or Crescent. The convoy should pass through Council Bluffs on August 25th.