You are here: Home / News / Iowa GOP chair pushes back at recession predictions 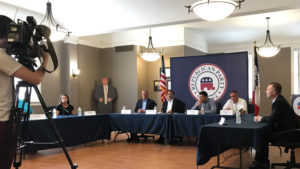 Three state legislators and three members of the business community joined for a discussion at the Iowa Republican Party’s headquarters today to tout what Iowa GOP chairman Jeff Kaufmann calls the “Trump economy.”

“The Democrats are ignoring these statistics,” Kaufmann said. “I mean, they’re just not talking about them.”

Anthony Marlowe, the CEO of MCI — an Iowa City based firm recently recognized as the state’s fastest growing company, spoke at the event.

“Rumors of a recession is nothing short of a scam,” Marlowe said. “…There is no recession around the corner or looming anywhere soon. It’s absolutely explosive what’s happening in the economy right now.”

The GOP chairman said economics is an art, not a science. 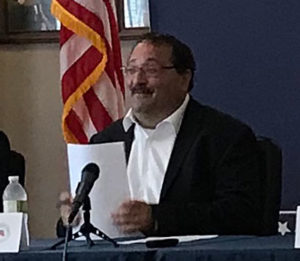 “You can see just by using pragmatic logic that these Democrats are just making this crap up for political points and they’re cherry picking some economists who will say what they want them to say,” Kaufmann said. “For crying out loud, we have socialist economists and we have capitalist, hard-core economists.”

Kaufmann said today’s event was organized to counter the messages delivered by the 20 Democratic presidential candidates who’ve been campaigning at the Iowa State Fair. Brook Doheny, a realtor from Clive, said people are listing their homes for sale because the Democratic candidates are fueling uncertainty.

“These people honestly want to be president of the United States of America and I wouldn’t even be friends with any of them. They scare me,” Doheny said. “They’re so out of touch.”

Republican State Representative Lee Hein raises corn, soybeans and cattle on his farm near Monticello. Hein said the farm economy is “tough,” but trade and tariff issues with China are “a small part” of the market downturn.

“If you follow the markets and trends and things, you will know that Iowa and the world right now are overproducing and demand is probably more of a problem,” Hein said.

John Wills of Spirit Lake, another Republican member of the Iowa House who participated in the forum, said China has been stealing from “every sector” of the U.S. economy.

“This trade war is needed,” Wills said. “I support the president and it’s something that will pay dividends forever.”