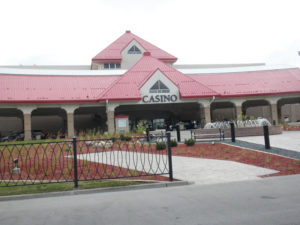 Prairie Meadows is one of the casinos that will offer sports gambling.

A new era in gambling in Iowa begins at high noon today.  Iowa Racing and Gaming Administrator Brian Ohorilko has been working with casinos to get them approved to offer legal sports betting on site or online.

“The last few days have been a flurry to finalize a number of controls and questions that  were still outstanding,” Ohorilko says. The Racing and Gaming Commission gave approval of the emergency rules for sports gambling just 16 days ago.  Ohorilko says the William Hill sports book has been approved as the operator for four casinos.

He says they are Prairie Meadows Racetrack & Casino (Altoona) , Lakeside Hotel & Casino (Osceola), Isle Casino Hotel Waterloo and Isle Casino Hotel Bettendorf.  “So sports wagering will take place on site on the retail side, also those four entities will be able to register folks for their on-line application,” Ohorilko say.  Other casinos have also had their wagering operators approved.

Speaking with Radio Iowa  late Wednesday, Ohorilko says they were still working on authorization for the Rythm City Casino in Davenport, the Riverside Casino and Grand Falls Casino in Larchwood. Ohorilko says the other casinos will likely get approval next week. He says some of the casinos wanted to get an early start.

“This is not historically a very busy time for sports books — so this does allow to have more of a soft opening prior to things becoming really crazy,” Ohorilko explains.  The kickoff of the pro and college football seasons at the end of this month will really ramp up the betting season.  Ohorilko says his office will shift to more of a regulatory function for those casinos approved for sports betting.

“We’ll be looking at if revenue is being reported accurately from a tax standpoint. We’ll be looking at any type of activity that is reported with respect to suspicious betting patterns and trying to run those down,” according to Ohorilko. He says the operation of the sports books themselves will be left up to the casinos and their partners.

“There will be I’m sure customer complaints as people are trying to understand how the industry works and getting familiar with the on-line apps. Those complaints should be directed to the operators,” he says.  Ohorilko says the commission would step back in if there are  problems with the operations not following the rules.