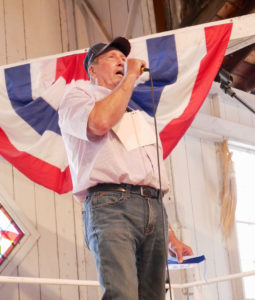 A handful of performers stepped onto a stage at the Iowa State Fair Thursday, prepared give their vocal chords a workout.

Chad Summers of Colfax practiced for about 24 hours before entering this year’s Iowa State Fair Yodeling Contest. His mother, Dina Wright, has finished in last place for the past four years — and was just fine when she tied for last place this year.

“I know that I do not know how to yodel, but I do know how to do the fair,” she said, “and, if you guys are even considering getting into any of the competitions, do it because it is so much fun.”

Sue Gustafson promised that if she raised $2,000 for cystic fibrosis, in her granddaughter’s name, she’d enter the yodeling competition herself. Gustafson won second place.

Melinda Hendrickson has been judging the competition for about 10 years with her husband.

“I think it’s the versatility in the voice, the ability to, you know, cover ranges in a split second and go up and down,” Hendrickson said.

Ken Frette of Story City was crowned the champion yodeler of the 2019 Iowa State Fair.