You are here: Home / News / Ernst says farmers are angry about Trump’s role in ethanol waivers 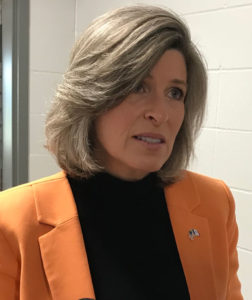 “I’m very disappointed,” Ernst said during a news conference this morning. “Our farmers are angry.”

The EPA last week granted 31 so-called “hardship” waivers that exempt a refiner from blending ethanol into gasoline. The ethanol industry says the waivers are a back-door way for big oil to avoid the federal ethanol mandate and experts say this year’s waivers already have reduced ethanol consumption by at least 10 percent.

Ernst indicated former Iowa Governor Terry Branstad, who’s now the U.S. Ambassador to China, hopes to bring up the issue during a meeting with Trump.

“This is a conversation that we will have to have with the president,” Ernst said. “I spoke to Ambassador Branstad two days ago and he will be spending some time in Washington, D.C. and so not only was he going to talk about the China trade issue and what’s happening in Hong Kong, but he was hoping to be able to speak directly to the president about the issue of the small refinery exemptions.”

Trump traveled to Iowa in June to announce E-P-A rules had been changed to allow year-round sale of gasoline with a higher, 15 percent blend of ethanol and Trump has repeatedly talked about how loyal voters farmers are to him. Ernst suggested these ethanol waivers are endangering that.

“It is very damaging to him,” Ernst said.

On Friday, Republican Senator Chuck Grassley bluntly said the EPA had “screwed” farmers by giving oil companies like Exxon and Chevron permission to avoid blending ethanol into gasoline. Grassley made his comments before a Reuters report was published indicating Trump gave the green light to EPA Administrator Andrew Wheeler to grant the waivers.