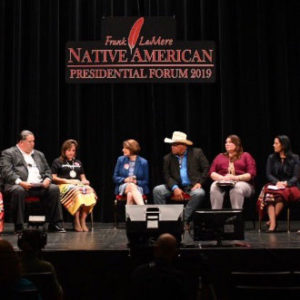 “If they can hook up the entire country of Iceland, I think we can hook up our Native American reservations and our tribal lands to make sure that they have high-speed internet for our kids,” Klobuchar said.

Harold Frazier, chairman of the Cheyenne River Sioux Tribe, told Klobuchar there are five washed out roads on his reservation in South Dakota due to this spring’s flooding.

“Nobody cares. It’s shameful to see the neglect in your own backyard,” Frazier said. “I have no faith in the federal government. We’ve been lied to enough.”

She then promised as president to make road repairs a priority, along with “green” solutions.

“Taking on the issue of climate change because as you know some of this flooding is getting worse,” Klobuchar said, to applause, “because our country didn’t have the same respect for our environment that your tribal community has.”